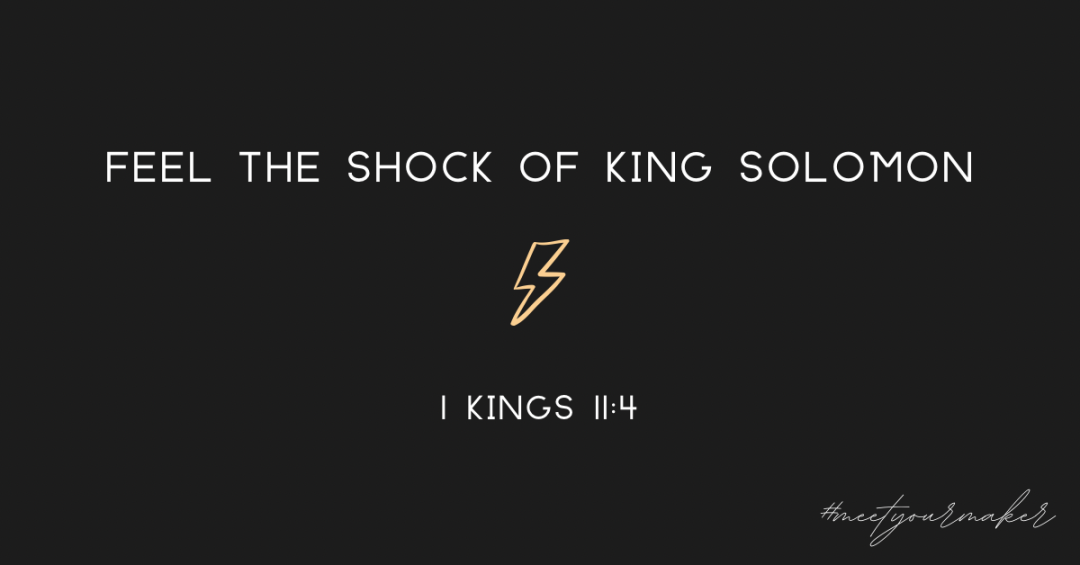 Feel The Shock Of Solomon Turning Away.

For when Solomon was old his wives turned away his heart after other gods, and his heart was not wholly true to the Lord his God, as was the heart of David his father.

When I read that verse last Thursday morning, I immediately prayed,

Lord, break my neck before you let me turn away from you in old age.

I’m not dropping that there as a mere attention grabber. I really prayed for that and I meant it. But, if it grabs your attention, then great because you need to pay attention lest you turn out like Solomon.

And so, here are three things that I think the author of 1 Kings wants you to see from this shocking event in Solomon’s life.

Savoring, as in ​enjoying completely with great delight.​ That’s why he didn’t stop at 1, 10, or even 100. He loves these foreign women. They are his treasures. The delights of his heart. That’s what the Bible is trying to get you to see in verse 2 when it says, ‘​Solomon clung to these in love​.​’

Don’t get sidetracked by his extreme polygamy. See the bigger point. Solomon knew better. Solomon knew this was wicked before the eyes of The Lord. This was not a so-called ​gray area​. The Lord had, on multiple occasions, told the people of Israel that they were forbidden to marry people who were not Israelites. They could marry between clans, they could marry between tribes, they could even marry a sojourner like Ruth who had converted to faith in The Lord. But, under no circumstances were they to join themselves in marriage with the people who were outside of believing Israel. And, this was a prohibition meant for their good! If we wonder why God is being so strict here, then wonder no more—he makes his reasoning crystal clear: ​for surely they will turn away your heart after their gods.

So, before we go any further I think we just need to draw that unpopular line in the sand. If you think that sinking your teeth into sin over and over again is without consequences, then learn the lesson from Solomon: ​eventually, you begin to savor it​.

He didn’t have seven hundred weddings in a day. This didn’t happen overnight. This is a pattern—and a pattern that developed and solidified over a long time.

This is a habit that began in his youthfulness which didn’t give its fruit until his old age. But, between those two very different ages of Solomon were all those years of a growing love affair with sin. There is a word we like to use to describe this type of thing: ​subtle​, occurring so delicately that you’re unaware of it. Solomon’s turning away in apostasy didn’t happen overnight. It was ​subtle​, like the growing of a tree’s roots—you don’t see it happening, but it’s getting deeper and wider every day. That’s a sobering thought.

Subtle changes often lead to a shocking end. It’s like the person who looks in the mirror and suddenly realizes they are twenty years older. You didn’t notice the wrinkles forming, and the gray hairs growing—but one day you finally notice the changes, and it shocks you at how you suddenly look so different.

Likewise, Solomon in his youth would have been shocked at how different he would be spiritually in his old age. If you had told the young Solomon, that we read about in 1 Kings 8 and 9, what would happen to him in 1 Kings 11:4, he would have laughed at you to scorn. And for good reason, it almost doesn’t even seem like the same person. Solomon, in 1 Kings 8 is praying with his hands lifted high to heaven. In 1 Kings 9, those hands are stained from offering bloody sacrifices in worship to the Lord. But, in 1 Kings 11 those same hands are clinging to idols. That’s the importance of reading Solomon’s apostasy in context with the rest of Solomon’s story—the author wants us to be shocked by the change that we suddenly see.

But, why? What purpose is this ​shock​ designed to serve? I think a fitting answer is Paul’s principle he gives in 1 Corinthians 10:6, ​

Now these things took place as examples for us, that we might not desire evil as they did.

Let’s bring this to a conclusion, shall we? Am I saying that Christians ought’ to live their lives shaking in fear of what old age will bring? No, God forbid! I am a firm believer in God’s sovereign perseverance of His saints. He will not lose a single one of His children. Believe that. Rejoice over that. Tattoo that onto your heart.

But, I am saying that Christians ought’ to live their lives with a sobering fear of what old age could​ bring ​if​ they persist in unrepentance. That sobering fear, which the entire book of Hebrews calls you to reckon with, is a means of God’s persevering grace to His people when they become drunk with the pleasures of the world.

Feel the sobering shock of Solomon’s apostasy and rejoice. Yes, rejoice because perhaps God has sent that shock to wake you up. If ​today​ you hear his voice, do not harden your hearts. If today​ you hear the low growl of the hound of heaven hot on your trail, ​be zealous and repent.​Learn the lesson of Solomon’s apostasy because ​repentance is never easier tomorrow.​

Feel that sobering shock of Solomon’s apostasy and turn back, for perhaps it is God’s gracious means to save your neck.

Welcome to Ignited Glory! I pray that you find your time here both edifying and encouraging. First and foremost, I am a disciple of The Lord Jesus. Secondly I am a joyfully married man to a wonderful wife. Thirdly I love the local church and consider it a supreme blessing to have an opportunity to serve the local church. Currently I am serving as the student pastor at Rainsville First Baptist Church. A recent graduate from Athens State University with a Bachelors in Biology, I am now pursuing a Masters in Divinity from New Orleans Baptist Theological Seminary with a specialization in Christian theology. Favorite authors include R.C. Sproul, Tim Keller, Mark Twain, and Harper Lee. Avid Reader/ Coffee Connoisseur/ Flapper of gums/ I do not engage in small talk. View all posts by brogardner